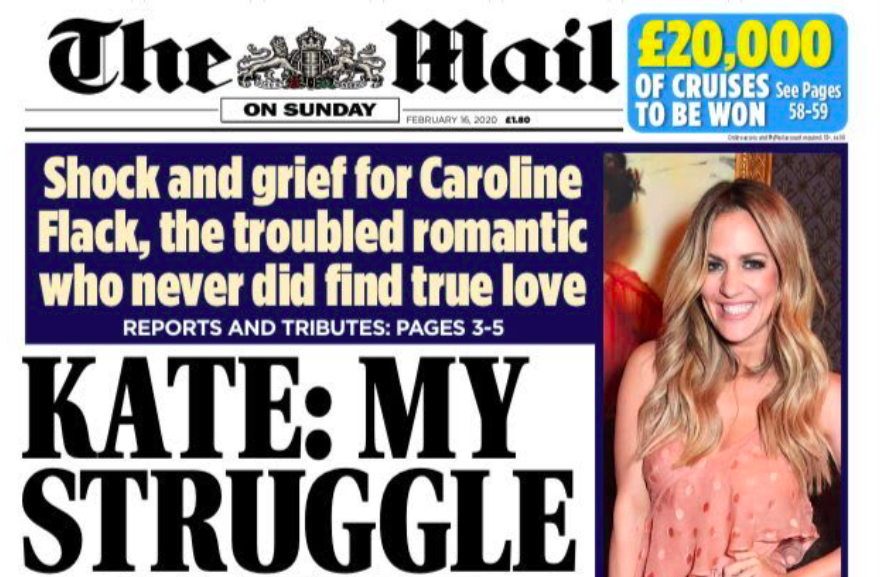 Three of my friends have committed suicide over the past few years and it’s so upsetting because with therapy and support, they’d have emerged from the pitch black that had, temporarily but permanently in their eyes, engulfed them.

I’ve liked Flack since she presented The Xtra Factor, back in the day when X Factor was still entertaining and watchable. She and Olly Murs were so much better than her predecessor Konnie Huq, who I found abrasive and clippy. Flackers was like a breath of fresh air, and her chemistry with Olly Murs oozed from the telly. Plus, she was fabulous on Strictly.

Back in December, just after she’d been arrested for allegedly assaulting her boyfriend, one of my friends and I had a lengthy conversation about Flack’s relationship with the tabloids. The conversation revolved around why her career had never really progressed beyond ITV2; that her love-life dominated her public persona and whether that had stymied her career. We discussed the role Flack, herself, was playing in fuelling the tabloid obsession with her private life, and how much pressure she must constantly feel as a result of the coverage she received. But that, ultimately, the tabloid agenda exists solely to sell more copies and generate more clicks - and is, ultimately, one of the most basic examples of supply and demand economics.

Editors commission, and journalists write stories that people want to read – and in this day and age, when people are less connected to the communities in which they live, celebrity gossip is lapped up from behind a virtual, twitching net curtain.

Which is why this past weekend’s outpouring of social media grief and Be Kind banners, picture frames and memes was nothing short of sick-making hypocrisy.

Many of the sharers were no doubt the same people who consume ego-damaging, celebrity-obsessed, misogynistic media on a daily basis. Who, over the years, had been revelling in headlines like 'Flackers Can’t Keep A Man...’ ‘40 & No Kids – Life’s Over For Flackers...’ ‘Crazy Woman!!!’ ‘Flackers Has Lost It...’ ‘CAREER OVER...’ ‘FAILURE!!!’ ‘Flackers? Drunk Again...’ ‘Love Island’s No Different Without Flack...’ ‘SHOW MUST GO ON!!!’ ‘Laura Whitmore A Love Island Triumph...’ ‘Caroline Who?’

The same people who obsess over who’s dating whom and who was stumbling out of a taxi – underwear on show – at 6am last Saturday. Who obsess over celebrities’ hair, faces, bodies, make-up, thigh gaps, biceps, arses, abs, boyfriends, girlfriends, this failed relationship, that failed relationship. Who watch programmes like Love Island and elevate the participants to some exalted status, even though they have questionable-to-zero talent.

The same people whose insatiable appetite for gossip and salaciousness stole Flack’s life.

Caroline Flack presented Xtra Factor, X-Factor, Love Island - three of ITV’s most successful shows. She won Strictly, the BBC’s flagship entertainment show. Career-wise, she was a hugely successful woman, whose achievements (arguably) dwarf every single one of ours put together. She was a sensitive, mischievous and fun person – you only had to watch her on TV to realise that. And yet her entire narrative was framed by what she looked like and her ‘failed’ love-life. And on Sunday, the ever-repugnant, misogynistic Daily Mail chose – still – to paint her as a failure across its front page.

I hope this is a watershed and that people aren’t simply jumping on the latest Bandwagon of Public Grief. I hope they reflect on how they’ve been complicit in making one of British TV’s most successful female presenters kill herself. If only for a split second. And as a result, choose to end their demand for this kind of shitty journalism that destroys people’s – women’s – lives.

Cut the demand, the supply will wither. Will it happen? No.