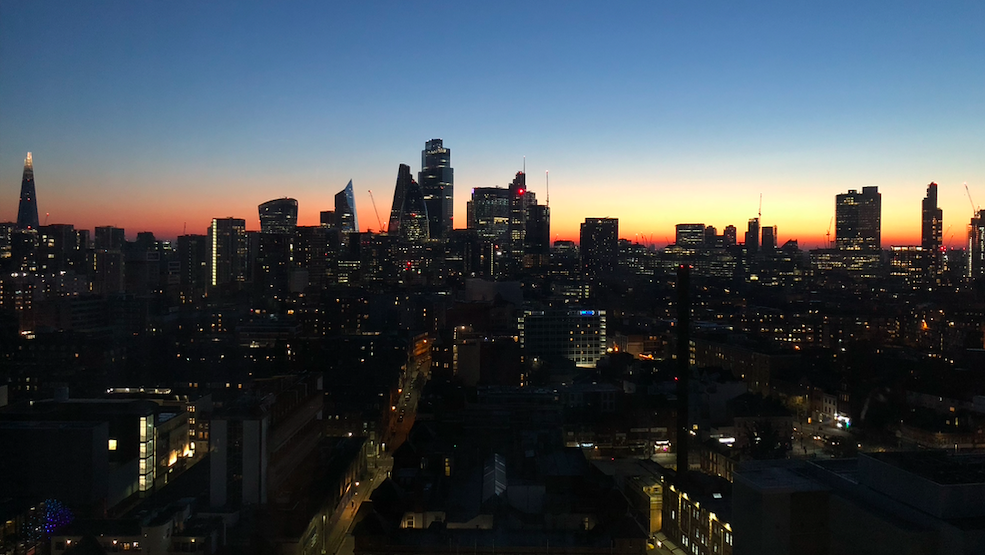 I was discharged from the Royal London last Thursday.

I’ve been in hospital a couple of times over the past year; I’m used to the comings and goings and, ordinarily, being an inpatient wouldn’t faze me. But being there at this time has shaped my thoughts.

I left feeling traumatised. I walked the mile back home – I wanted to walk – I felt shell-shocked.

By the time I left I was questioning what I’d written the previous weekend, and whether I’d got it all wrong.

I was in isolation for 24 hours, first in A&E and then on a ward. When the Covid-19 swabs came back positive I was transferred to a Covid ward on the 13th floor; my bay and bed had the most beautiful, serene westerly view, over the City. The Shard to the left; the (appallingly named) Avant Garde Tower, at the end of my street, to the right; Gherkin straight ahead. Calm, abandoned streets during the day; stunning sunsets.

A 180-degree turn, and the scene couldn’t have been more different. A bit like you’d imagine a hospital after a motorway pile-up, or bomb.

Unbelievable professionalism and compassion from the doctors, nurses and healthcare assistants who worked tirelessly. One night – Tuesday night – every patient in the next bay to me died. One of them was a market trader on Whitechapel Road, 49 years-old, who the nurse looking after me knew because she bought stuff from his stall. She said the majority of patients were leaving in body bags and there was nothing they could do to stop it.

You could see the stress in their eyes – their eyes being all you could see. The lower parts of the faces were covered in masks: on days 1 and 2 ordinary surgical masks, which I also had to wear; on Tuesday the proper, tightly sealed masks I’d seen on the TV – the white, coned, beaky kind of ones. That morning I heard one of the nurses – or someone – say ‘I’ve been here 72 hours and now you’re giving me this? It’s a joke.’

By Wednesday, plastic aprons had been ditched and everyone was fully cloaked in PPE: long-sleeved gowns and visors. All the gowns were removed before they left the bay and thrown in the bin. A complete and unnecessary waste given every patient on the ward was in the same infection cohort but, you know, NHS protocol and bureaucracy and all that…

The PPE and protocol at the hospital indicate this is an incredibly infectious virus. And it is serious: it’s not like normal flu – it’s like a very bad flu with someone sizeable sitting on your chest, so you’re gasping for air. I’m fit with good respiratory and cardiovascular health and I struggled: it’s easy to understand why the death toll could be astronomical, when the majority of the UK’s population is overweight and unfit.

I left understanding why we need to give the NHS – both the medics and the system – a fighting chance. But then over the weekend I watched the news and read the papers and was continually dumbfounded by the details of the lockdown.

But it’s just so piecemeal and illogical and not thought through.

Nana, who’s now 101 and still lives on her own, has carers three times a day: first thing, lunch and bedtime. None of them is wearing a mask. I’ve raised this and Mother’s raised it: the care team hasn’t received a directive and they don’t have a supply of masks. We’re discussing whether we cancel the carers: that is not an option for most people needing the service.

Any shop selling food can stay open. It’s impossible to socially distance in Tesco or Sainsbury’s on Bethnal Green Road and I imagine it’s the same in most supermarkets in London. At the weekend, customers were reaching over each other, picking up stuff, having a feel and putting it back on (the almost empty) shelves. Staff were wandering around mask-free among the customers, presumably for the duration of their shifts. And then all these people were going home to their partners, kids and/or flatmates. And then these kids were going to school and the partners and flatmates were going to their places of work or going about their business and coming into contact with loads of more people.

People can still buy non-food and non-essential items from food shops, but if the shop doesn’t sell food it can’t open. That’s not an even playing field: it’s not right. (If I had a shop, I’d nip down the cash and carry, buy some crisps, chocolate and soft drinks and open it up).

Warehouses and factories are open for business: will everyone working in them be able to socially distance at all times? Doubtful.

Cafés, restaurants and pubs can open for take-aways and deliveries, even though people who work in the kitchens will be cheek to jowl.

DIY shops and garden centres are closed, even though they could adopt the same protocol as food shops. And with all the people stuck at home with time on their hands, they could be doing a roaring trade and boosting the economy. What’s more, both gardening and DIY are creative and therapeutic: they will help people stay positive; they will boost people’s mental health. Only this morning, the Horticultural Trades Association has released a statement warning that millions of garden plants are set to be binned, and a third of producers could go bust. It’s ridiculous, needless and totally avoidable: this is the time of year people want and need plants.

Businesses are going to the wall because a random set of rules is being applied even more randomly.

At Sunday’s Daily Briefing, the deputy chief medical officer said it could be six months before the UK is back to some kind of normal. If I had a business that were supposed to be shut, I’d work out how to protect my workers and customers, and open anyway.