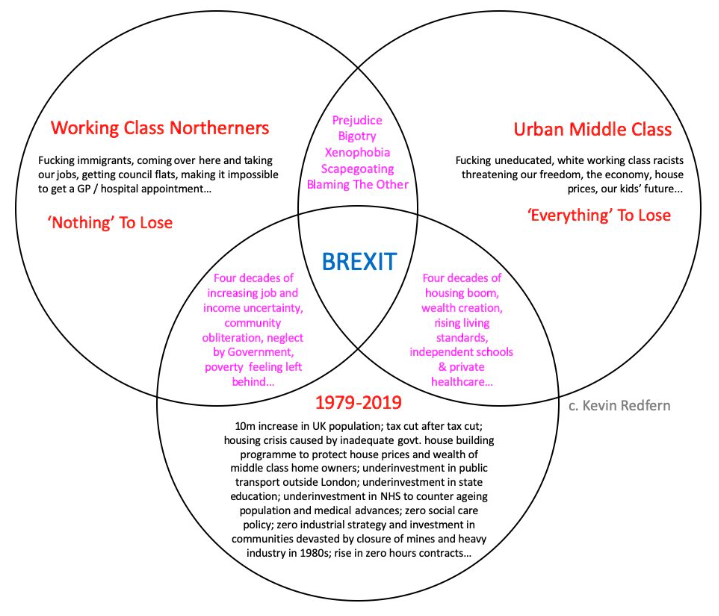 The weekend before the 2016 Brexit referendum I went ‘home’, back to Derbyshire, for my grandmother’s 98th birthday.

Leave posters were everywhere; Remain posters few and far between. The residents of Derbyshire South have returned the candidate of the ‘winning’ party at every election since the constituency was created in 1979. I knew, that weekend, that the country would vote to Leave the EU on 23 June.

What I didn’t predict, though, was the rabid xenophobia the result would invoke among my supposedly liberal friends. Usually intelligent, compassionate people were spouting the most horrifically prejudicial, bigoted crap. It was quite arresting.

It happened again last week, as we – the UK – officially departed the EU. A clambering, yet again, to shout ‘Racists!’ ‘Stupid!’ ‘Thick!’ An almost universal failure to put themselves in the shoes of Leave voters, to understand their perspective and logic for choosing Leave. So I created a Venn diagram to try to explain.

People need to be heard and listened to. They need to feel like they count and feel important. When this doesn’t happen, they start to think ‘Fuck it.’ They look for alternatives, an escape, a saviour. And this is the same with business and with brands.

Listen to your customers. Deliver what they want. Create a seamless, amazing and continual experience that makes them feel important and special. Make it as hard as possible for them to seek comfort elsewhere and leave you, for a competitor. Because when you don’t, their loyalty will wane and they – and their custom and their hard-earned dollar – will leave you. Guaranteed.